One of the tastes I look forward to in the fall is Pumpkin Spice Coffee from Dunkin Donuts. The beauty of Weight Watchers is I can elect to have that if I want it, nothing is “off limits.” However, for quite a while now I’ve been staying away from the “Flavor Swirls” or the syrups they use because they are so sweet and I think that when I drink them, I have a “hungrier kind of day.” So this morning I found myself craving that pumpkin taste so I made oatmeal with pumpkin puree, pumpkin spice seasoning, and a banana. If pumpkin is calling you, this is a nice low point option at 3sp.

Sometimes a salad or a wrap just won’t cut the mustard. So why not have a frankfurter instead?  Have you ever tried Boar’s Head Lite Frankfurters? At 3sp each they are a great bargain. Throw in a light roll, skip the fries and have veggies and you get a very satisfying 5sp lunch!

V-A-R-I-E-T-Y!  I need to eat a great variety of foods if this is going to work, so when dinner rolled around it was suggested to me that we haven’t had Gemeli a while. This was a little daunting: “Pasta uses a lot of points. You don’t get that much… The idea of macaroni and meat sauce is very tempting. Should I go for it? I could always bulk it up with some kind of vegetable… What if…”  These are the secret machinations of a Weight Watcher who is engaged with the program.

Well, I bought it and agreed it doesn’t look like very much, but with the meat sauce and low-fat ricotta cheese it was enough to satisfy me: 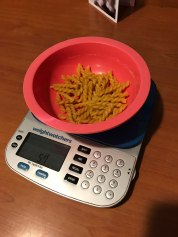 It’s sort of ironic that I find myself eating out of “Share” dish considering I won’t share any of my food because it’s all weighed and measured as if I were a pharmacist.  I do my best to keep my sense of humor.

later, I’m going to try a Fuji Apple that is actually from Japan. It’s kind of cool to think about the apple’s story. Picked from an orchard in Japan and its voyage from half-way around the world. You can probably tell I read a lot of children’s books…

Thank you for reading more tomorrow…

P.S. Today’s Featured Image was found on a walk home on a foggy dreary day, showing me that there is always something bright and beautiful to be found – all we have to do is look for it. Hope you had a great day today.

The Road to Maintenance